it is obvious that  these were not “created” for revenue raising purposes to extract bucks from collectors - quite the opposite.  The highest overprinted value was K1, which was then worth about $US50˘!  Some have face values of a couple of pennies each.  If there had been 20K “Air Express” versions, or 15K “Officials” or whatever, a lá Cook Islands, we would all have reason to be a lot more suspicious and cynical! The original “Set of 11” still remains one of the scarcest post war definitive sets
from ANY Commonwealth country.

The reason there were both the “small t” and “large T” basic stamps issued in the first place is a fascinating and rather controversial story. The set was printed showing all denominations as 21T, 60T etc, whereas the convention in PNG is for cents (“toya”) to be written 21t, 60t etc.  The set of 4 was reprinted to show the correct “small t” style, and the “large T” set was not issued, but stored at the Bureau in Port Moresby.

A Sydney dealer, Gabrielle Woodbine of Gabrielle's Philatelic Service somehow obtained and advertised the “unissued” set of 4 “large T” denominated Bird Of Paradise stamps at $A1,000 per set 4,  $2,000 a pair, and $5,000 per blocks of 4,  and they sold out.

All this was done in one page full colour ads in an Australian magazine.  I understand some other dealers offered these stamp at similar prices, and also sold out.  Whether purchasers at these prices ever got a refund based on the following paragraph, I never did find out!   I’d love to hear how you went if you attempted to obtain a refund of your monies.

The PNG Philatelic Bureau got very angry that such stamps, basically “printer’s waste” were being sold at such amazing prices, and simply beat the dealers at their own game, and issued a Press Release commenting on this profiteering, and placing on sale the “Large T” stamps to all who wanted them, at face value of a few dollars a set!

The Bureau issued a one page news release to all customers pointing out these high prices being asked, and thus explaining their reasons for making 50,000 sets of 4 of the “Big T” stamps available at face value.  A little like the “Legends Of The West” sheetlet controversy that occurred in the USA.

If you are totally confused by now, congratulations ... join everybody else!

On June 20th 1995 the PNG Post Office was again running low on 21t stamps, the B.O.P. series having apparently sold out, so all remainders of the 1993 “Freshwater Fish” stamps 45t, 60t, and 90t were duly overprinted “21t”, and a total of 540,000 stamps were produced, which should have been sufficient for around 10 weeks supply of stamps.  The Post Office felt sure the new 25t rate would be approved before that time period.

The printing quality, especially on the lowest print number, 21t on 60t brown colour Fish stamp, is terrible, with lots of heavy black offsets and smears on the gum side, and much overinking on the overprints, sometimes making the overprint twice or triple the regular thickness.  Once again, the Bureau did NOT offer a First Day cover for the “Freshwater Fish” set, and only a small number seem to have been prepared by collectors “on the spot” in Port Moresby One sheet of INVERTED overprints of the 50t on 35t Gogodala Mask was purchased at face value at the local Post Office in Kainantu PNG in February 1995.  The finder supplied a sworn Statutory Declaration outlining the discovery, and offered them to me for purchase soon after. This was a front page discovery item in the local Stamp Magazine, and in “Linn’s Stamp News” in the USA etc.  I quickly sold all 38 copies from this sheet to clients, the finder keeping 3 corner blocks of 4 for his family members.

One copy from the 38 I purchased was sent for a clear Royal Philatelic Society Victoria Expert Certificate, so as to ensure a SG listing, and was then auctioned by Rodney A. Perry, realising a healthy $A1,540.  The 38 copies I had were sold for $A750 apiece to original buyers.  Stanley Gibbons subsequently catalogued this Inverted Surcharge error as SG #736a.  It has been untouched in price for years oddly at just Ł600=$A1,200.

Many of these 38 copies have already passed back through my hands over the past 25 years, and sold for double that price via my ads in the stamp magazines and on my websites so the original buyers were very happy!  One dealer buyer Stampfinder at Milson's Point, offered some of these 38 stamps for sale by Public Tender in the stamp magazines, and reported good response at around the $A2,000 a stamp level.

This is a higher price than any other PNG stamp since the first set was issued in 1952, and a commentary on the worldwide demand for major errors from this exciting "Emergency" set.  An IMPRINT single from this set arrived back in my hands this week. Fresh well centred MUH, and with the Leigh Mardon imprint is of course UNIQUE.  Price is just $A800. (Stock 793JQ)

If you ever have a chance to examine a sheet of the quite inexpensive 1994 65t on 50t “National Census” stamp, it must rate as the most inept overprint job in the history of the world!  The overprint obliteration rectangle on EVERY stamp in the sheet of 50 varies wildly in size and shape and position.  A young child with a black ink felt marker pen would have done a far neater job.

A sheet of 50 mint stamps will cost you around $A150 from specialist PNG stockists like myself, and is a philatelic gem, able to be appreciated by even those with dreadful eyesight, and of great interest to any keen philatelist who does not even collect PNG!  I sell many sheets each year.

In Australia the retail price for an “Emergency Set of 11” as quoted by the “Australian Stamp Catalogue” is $A420. This “set of 11” must surely be one of the most expensive sets issued anywhere in the world since World War II. It is a set bursting with appeal for philatelists, given the vast number of errors and varieties that abound.

The good thing is that these printing errors were all created accidentally by local printers with no idea the “fly specking” eyes of the world stamp collecting fraternity would one day be examining their handiwork!  The stamps were overprinted very roughly, and very quickly, to cater for genuine emergency postal needs, and this sort of issue is what whets the appetite of a serious collector.

For the interest of collectors, a tabulation of these issues is reproduced below, along with official numbers printed, issue dates, and retail price in Australia, published with the kind permission of the Editor of the “Australasian Stamp Catalogue”,  published by Seven Seas Stamps.


One copy from this sheet was sent for a Royal Philatelic Society Victoria Certificate and was then auctioned by Rodney A. Perry

realising a healthy $A1540.  This stamp is now SG#736a, cat Ł600.  The 38 copies I had were sold for $A750 apiece.  One dealer,  Stampfinder at Milson’s Point offered some of these 38 stamps for sale by Public Tender in page magazine ads, and reported good response at around the $A2,000 a stamp level.  This is a higher price than any other PNG stamp since the first set was issued in 1952, and is a commentary on the worldwide demand for major errors from this exciting “Emergency” set.

"The 50t Gogodala is the absolute 'key' to the set.  Every copy we secure, mint or used, completes another set of 11 for us.  We estimate that of the 45,000 printed, no more than 1,000 copies exist today worldwide in the hands of collectors, mint or used".

The error discovered is on this same stamp.  At my stand at an ASDA show in Sydney, well known specialist collector Lance Skinner showed me the used copy later illustrated on the front cover of an “Australasian Stamps” magazine article.  Lance is a past-President of the Australian Commonwealth Collector's Club, and is a renowned specialist on KGV heads and has received the highest APF medals.

Lance is typical of the serious traditional collectors who flocked to this PNG overprint issue as it offered a true challenge to a philatelist, due to its crude and "plateable" nature.  The stamp was creased top right corner, and has a light but just discernable circular machine cancel reading in 5 lines "Goroka/1995/13 Jan/12.30pm/PNG".  Furthermore that cancel was in an unusual shade of violet black.

The big thing was not the cancel, but the overprint ..... which was clearly and rather spectacularly

DOUBLED.  The first overprint had been a light impression, and the printer had ran the sheet through again, with correct inking, but mis-registered it, to a full 3mm to the left of the original print.  I asked Lance where he obtained the stamp.  It came from a kiloware source and figuratively "cost him nothing".  It was some time after he purchased it that he noticed the error.  I asked if he wished to sell it as I had a large group of keen collectors of this set, and he said "no way" - so I thought nothing further of the matter until some months later.

When visiting the huge "Pacific 97" Stamp show in San Francisco in June that year, I called in at the stand of well known Melbourne dealer Michael Eastick.  With a proud flourish he showed me an item he had just purchased from an American visitor to the show.  It was a USA made "legal" sized envelope, posted to Scranton PA by air mail.  The sender was the unfortunately named Mr. Jay Puke of Goroka, EHP. (Eastern Highlands Province)  The cover is 100% commercial.  It has been machine opened on 2 sides, and has filing staple holes at the left, as if an enclosed letter or payment had been originally affixed there for processing. (See scan on ink below.)

The striking thing about the franking is that both 50t Gogodala stamps are also DOUBLE OVERPRINTS.  They appear consistent with coming from the same sheet as that of Lance Skinner's single used copy.  Best of all is the postmarking.  The two stamps were (just) tied with a roller cancel on which the date is not clear.  However, to the side of the adhesives there is another strike, a light but completely legible right half of the roller cancel, which reads in 5 lines precisely the SAME town, time and date as that found on Lance Skinner's example!  Better still, the same curious black violet ink had also been used.  For a photo see -

GENUINE IN ALL RESPECTS NOTE - All prices on this page are in weak AUSTRALIAN Dollars: Special "Web Only" discounted prices
for individual groupings are as follows: This still today is a very rare stamp.  SG #734 and current 2007 SG Cat price is Ł40 each = $A100 a STAMP = $A1,600.  Here we have 16 stamps in matched corner imprint blocks.  My usual price for a single is $60 so 16 singles is $960, making no allowance for the obvious premium that matched Imprint blocks like this must attract.  Such an assembly must be virtually unique?  Also the impeccable provenance and photo-certificate from 1995 will always be worth a premium too.  A real bottom drawer item - the lot for $A650

I am a Proud Member Of :

Full Time Stamp Dealer in Australia for over 40 years. 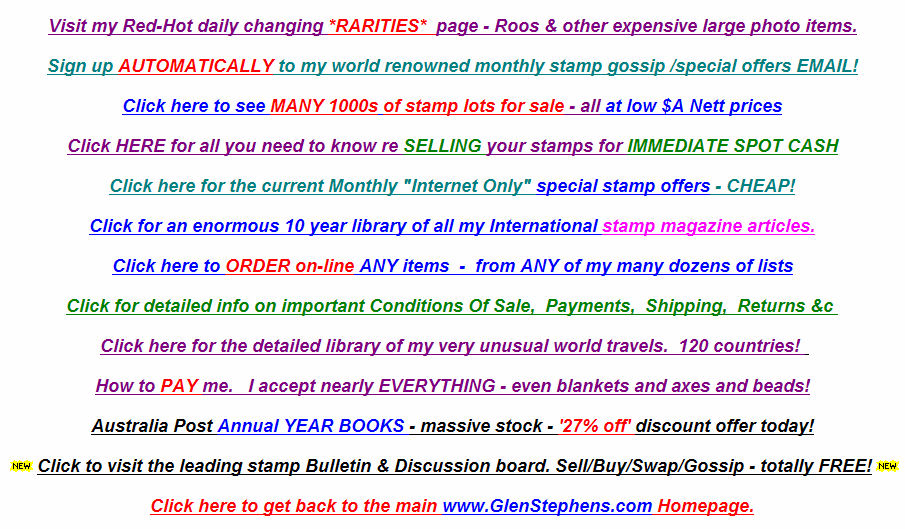