A lot of readers own or handle the common letter rate Australian States material from the 1890s-1910 era,  that are very common.

These usually have a value of a few cents each used.  Indeed they are often still sold for peanuts as “bundleware”.

However many of them have town or numeral postmarks on them, that make them worth many times more than a FU £1 high value from the same State!

I have noticed a few selling recently for terrific prices, and record them here for the possible interest/profit of others.

Often the scarce strikes are detectable as being from seldom used “as new” cancellers with sharp letters and detail.  Not always however. 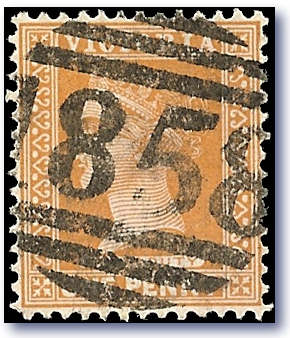 Would you spot this one?

Can YOU read this numeral? 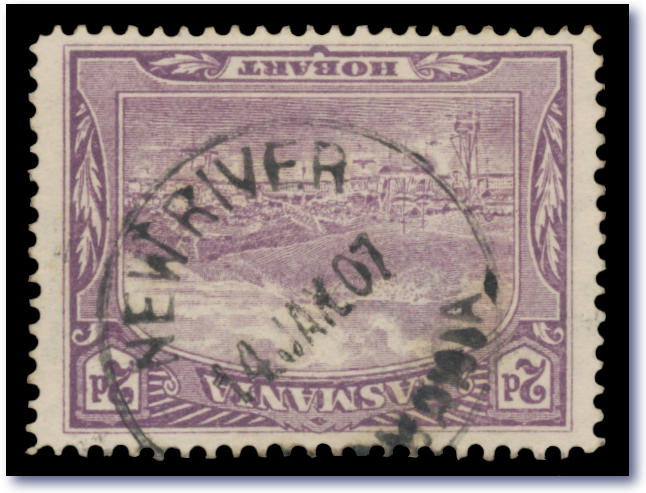 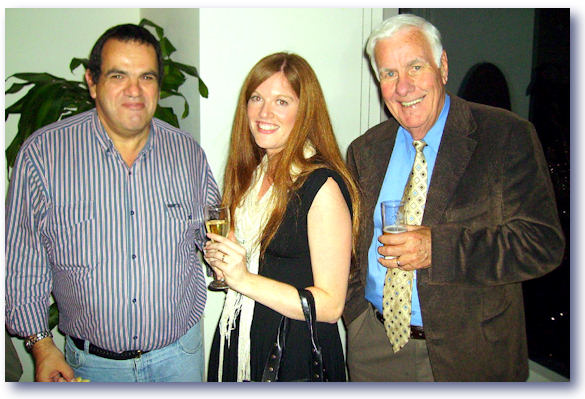 All these profits from selling Tasmania cancels and other goodies, have encouraged Prestige Auctions to open a Sydney based office.

Based in a little office very high up, right opposite the Town Hall Station, they had a grand opening drinks and cocktails party a couple of weeks ago, that was well attended.

Owner Gary Watson stated no auctions would be held in Sydney in the ‘forseeable future’, but local viewing was now to be a regular feature Prestige offered. 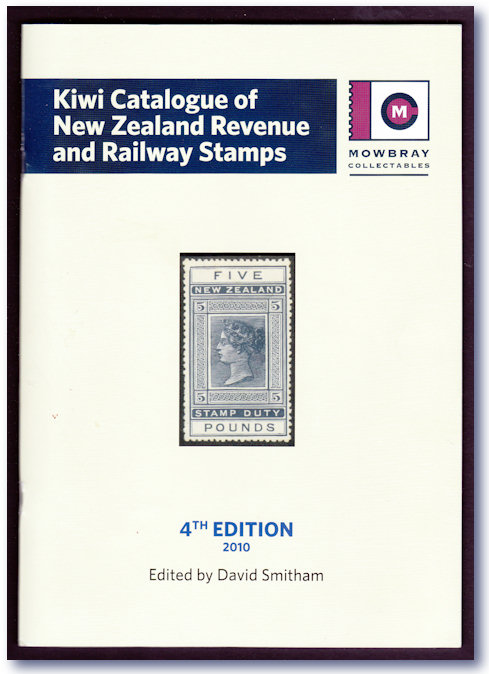 David is also Chairman of the large “Palmpex 2010 Stamp Show” in Palmerston North in November 2010.

A number of stampboards members are attending, and I hope to see a few reader faces from here over there as well!

Every reader of this column has bought an album or stockbook or glassine where the “fiscal” stamps have been relegated to the back – and assumed to be worth “nothing”. 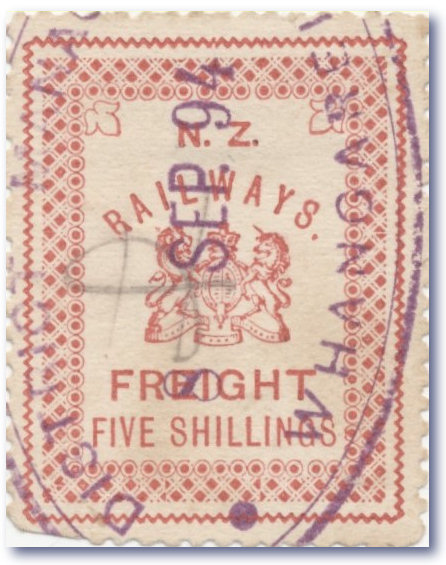 A pen or violet cancel does not always mean “worthless”.  Study the 5/- red stamp above, which has both pen AND oval violet cancels.

I ran a poll on stampboards asking members to nominate the value – www.tinyurl.com/FreightNZ  - and it was worth TEN TIMES or more different in real value, than the vast majority (70%) voted.

Indeed fully 22% voted the value to be $5 or under, and several nominated the worth as 5c – as you can see!

That $5,000 price is more than virtually any issued POSTAGE stamp from NZ, so re-asses your view.

Even the 1/- of this design is worth around half these sums.  Who look twice at a 1/- Rail stamp?

The fairly gruesome looking 12/6d QV Revenue nearby sold at auction in NZ for $4,440, so do NOT dismiss these stamps as “fiscal junk.” 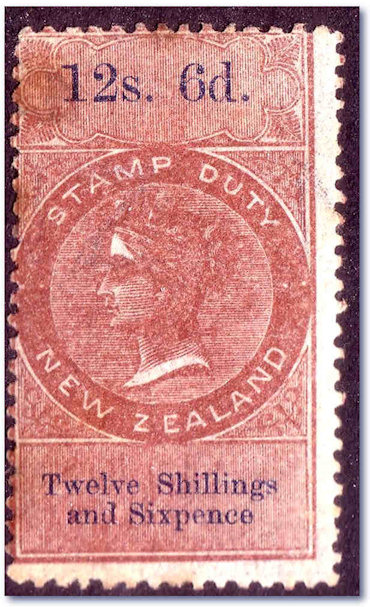 The 44 page catalogue lists and prices in detail all NZ revenues and fiscal and railway issues.  With full colour illustrations.

The mass of Social Secuity issues, Honey Seals, Land and Deeds, Beer Duty, Law Court and similar wacko things and the many overprints and printings are all in here too!

You can order off Mowbrays for $NZ30 post paid worldwide IF you mention this column to - arna@mowbrays.co.nz  - or from Brian Moore in Sydney for a similar price – www.tinyurl.com/MooreNZ  - both accept credit cards and PayPal. 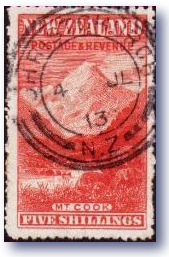 EVERY dealer and collector needs this new book. Take a good look at the 5/- Mt. Cook nearby.  Is it postal or fiscal cancelled?

99% of dealers will cheerfully tell you POSTAL, and charge you ~$250.  However if you own this book David Smitham tells you it is FISCAL, and worth just 15% of that - and why!

It was issued on the very day that an official order came into effect, withdrawing all Official stamps from use.

The only known examples of this stamp in existence today belong to the Royal Collection, and in museums such as the National Postal Museum.

“Examples of this rarity just don’t come onto the open market” said Stanley Gibbons Director of Great Britain Stamps, Vince Cordell, when they purchased it.

A rather bleedingly obvious comment, seeing it is unique in private hands!

The original SG mid May press release said the stamp was being offered for sale at "£375,000", yet the latest press release early June says it was sold: "in a deal worth over £400K".

Maybe the buyer gave them a nice little tip?

One or both figures must presumably be wrong - and shows the danger of relying on press releases from the seller, for an accurate figure!

However, it does appear to have found a new home - for a lot of money.

It came from a collection in Switzerland in the 1950s, and has been passed from one private collection to another, before being offered to Stanley Gibbons earlier this year.

Gibbons claim the stamp was purchased privately by a buyer who wishes to remain anonymous.

Please take a look at the airmail cover shown nearby.

It was offered mid May on ebay by well known cover dealer Rodney Perry of Melbourne, with starting price $9.99 – very much around the correct value in my mind.

The $A440 eventually paid for this with postage cost, and with GST added to the ebay price as Rod does, is the height of insanity!  Even for ebay buyers.

Stampboards.com had a discussion on this - www.tinyurl.com/3cCoils  - and it is 105% PHILATELIC - no question whatever on that in my mind.

For a couple of years after Decimal currency it WAS legal to use the LSD stamps on mail, with or without Decimal issues. 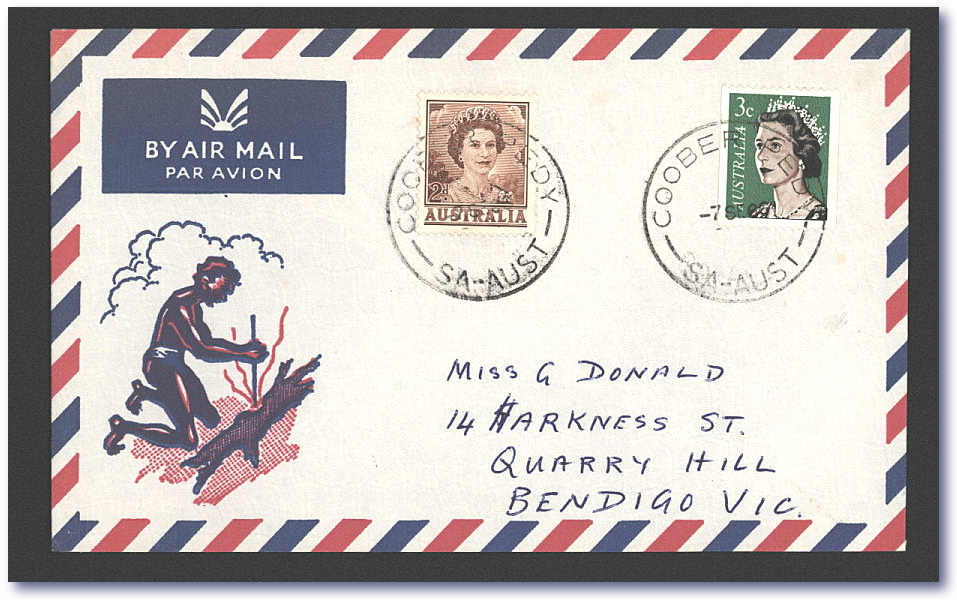 To add a 1d stamp to the 3c coil MIGHT have seen one able to argue (rather unconvincingly) this was paying the correct 4c letter rate.

Richard Breckon advises in a learned “GSM” article that on February 14, 1966 we had these as official rates -

So a 2d stamp was legally worth 2c, so this cover is legally franked at 5c. Over-franked,  therefore 105% philatelic in my book.

Not to mention there was very likely NO 3c coil machine within 1000 miles of tiny outback Coober Pedy PO in 1966.

Most folks bought the 3c QE2 coils from Philatelic Bureaux.  Only GPOs and very large offices had it in machines I understand, as it serviced no rate on its own.

No fault of Rod’s - he started the cover at $9.99 (more than I'd have asked!) did not make any grand claims, and the ebay “Bunnies” did the rest.

We must remember the 3c coil were ONLY sold in a coil 1000 stamps long. They were never on normal sale as singles or strips at any PO counter other than at Capital City GPO Philatelic Sales offices.

I'll bet tiny Coober Pedy PO did not have a machine dispensing 3c coils for which there was no rate.

As to LSD stamps being on sale at small PO's in 1967 - not possible.  As the same Breckon article (the Australia Post Archivist) clearly tells us –

“The Post Office announced that all stocks of pre-decimal stamps would be withdrawn from post offices on Saturday, 12 February 1966.

“Although they would no longer be on sale, pre-decimal stamps would remain valid for postage for two years following decimal currency.

“Then for a further three years after 14 February 1968, pre-decimal stamps could be exchanged for decimal stamps at post offices or cashed in to the Post Office at face value, less a ‘buy back’ commission of 10 per cent.

As I often type - new discoveries keep turning up --  sometimes 50 or 100 years after issue.

Earlier this year a Director of a large Sydney auction, Noble Numismatics phoned me about some nice stamp related items they'd received from an estate. 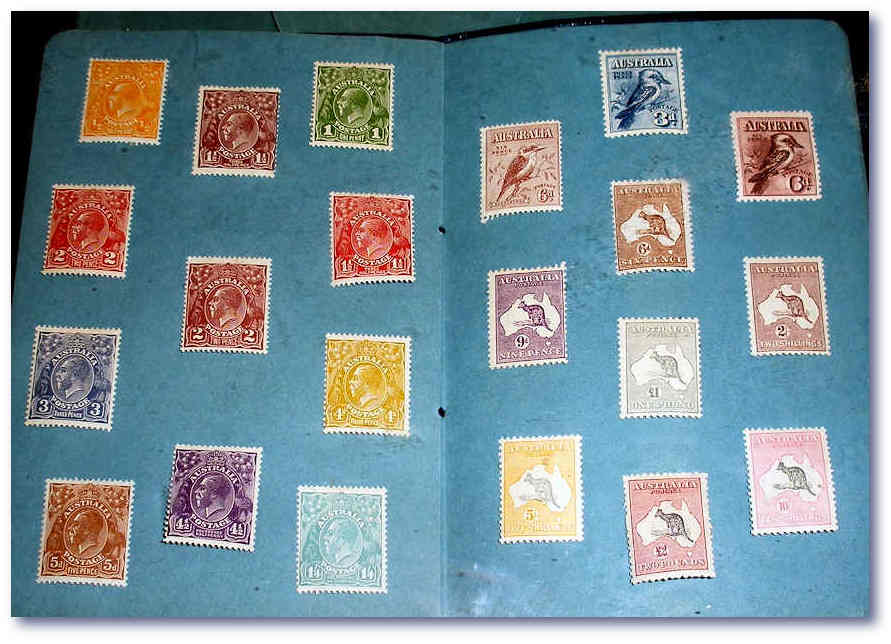 What a nice free gift!

Among them was a blue leather folder of Australian mint stamps, presented to delegates to the “Commonwealth Telegraph Conference Canberra”, in December 1942.

It had the original presentation letter to the recipient from the Postmaster General.

Unlike the other similar folders I have seen, this one contained the full range of current Australian stamps, but in MINT condition entirely.

The near exclusive policy for such presentation folders had been for corner CANCELLED stamps to be used …. generally for all values up to 5/-, and then overprinted "SPECIMEN" for all the higher values.

That also of course was the make-up of the "Specimen" folders of stamps sold by the PO to collectors, from 1913 up until about 1970.

This conference was right at the zenith of World War 2, and my guess is with so many normal staffers being overseas fighting the War, the usual "CTO" requirement was simply overlooked by the inexperienced co-opted workers.

In latter 1942 the Guadalcanal Campaign VERY close by us was in full intensity.  As was the Battle of Stalingrad, and the El Alamein struggle in Europe and North Africa, so stamp packs were of very minor concern I’d guess.

Nobles emailed me the scans too late to be used for the magazine deadline.

I drove to Canberra for the National show the next day, and to my amazement local dealer Eddie Cummins showed me an IDENTICAL album he was about to auction!

I assumed at first it was somehow the same one, but some discreet checks established there were two such near identical leather cover albums, that had been consigned to two auctions at the same time, by totally different vendors. 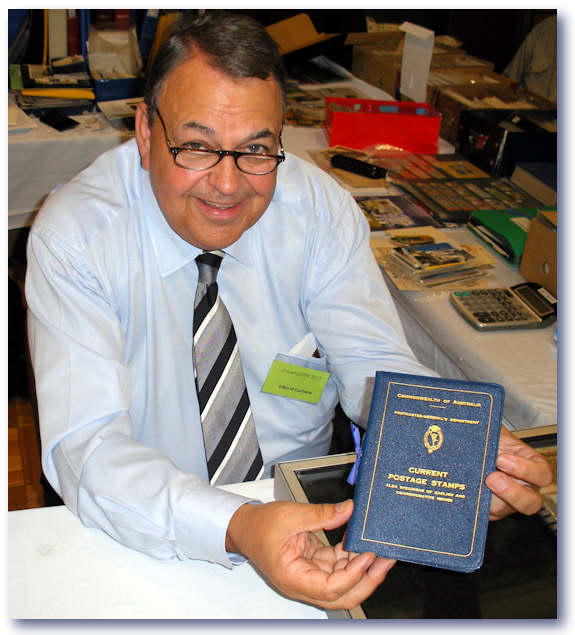 Again, inexperienced staff at GPO must have included those, which generally otherwise only exist corner CTO, or overprinted “FIVE PENCE”.

The Edlins folder was invoiced for $19,200 on estimate $10,000 to an Australian collector, and Eddie had a VERY happy local vendor.  The Noble Numismatics folder got a similar price.

What a great ‘freebie” to have been given for attending a conference!

Conditions of Sale, copy upon request BIGGEST STAMP BUYER: Post me ANYTHING via Registered Mail for my same-day cheque. Avoid the  GENERALLY 40%  Auction " Commissions" (15% + 17½ + GST, etc.) AND their five-month delays! Read this for details.
Sign up AUTOMATICALLY to my world renowned bi-weekly stamp gossip mailing list!

All content on every page of this site is International Copyright © 1995 - 2009 Glen Stephens. All rights Reserved.