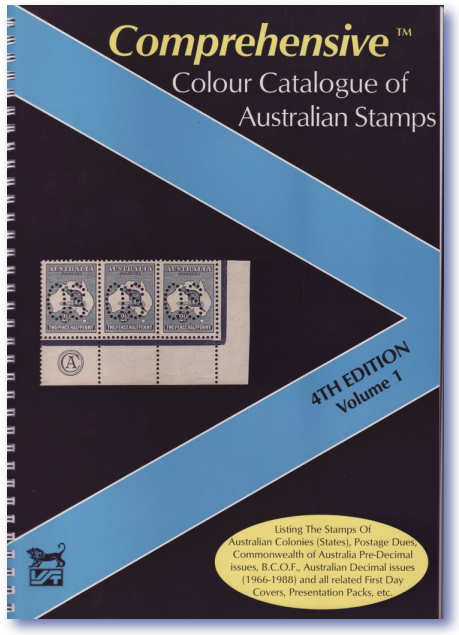 And the growing army of folks collecting Australian States issues will like the extensive listings here.

The type face is large enough so I can read it quickly and readily.  Some other catalogues have "saved" on page numbers by reducing font size, and I simply cannot read it in my declining years!

Most of my customers have even worse eyesight, so that is a silly move making fonts so small.  Each page here is on extra heavyweight gloss stock.  Colour reproductions on the modern issues are superb.

The listing of AAT material is second to none. FDC (Australian and base sets are specified and all priced) and PO packs are all priced – no other catalogue anywhere does this.  How many readers knew an Australian cancelled FDC of the 1979 Ships set from AAT was worth $600?  Not many I can bet.
Little gems like that will pay for this catalogue in no time.  Buy one today.
I sold 25 sets on pre-order alone via my newsletter, so the pent up demand for a wide reaching production like this is readily apparent to some at least.  (For order info see here –  www.stampboards.com/viewtopic.php?t=4329 )
Seven Seas Stamps has sadly lost the plot in recent years on their "Australia Stamp Catalogue" editions, and the ASC is now years out of date.  It has been totally out of stock for months, and I hear a new one will not be issued until latter 2008.

The once unassailable stranglehold the ASC had on the Australian market is now just a wistful memory over at Brookvale. 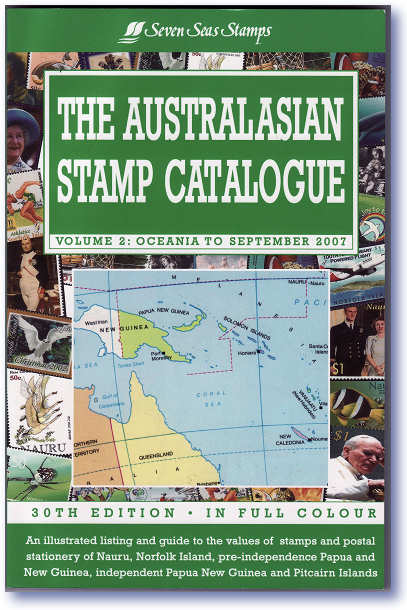 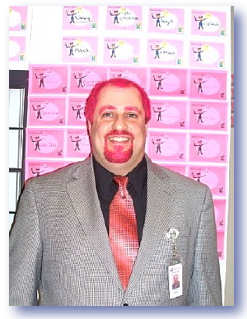 The boss keeps his word

On November 1, Mr. Santilli came into his post office with not only pink hair, but fluorescent pink eyebrows, moustache and goatee beard to match - see photo nearby.

The six sales clerks who serve customers in the Barrington post office exceeded Mr. Santilli's challenge, and sold approximately $US6,500 of the pink stamps.  The previous year, that post office sold $US1,800 worth of the stamps.

"We have the best clerks in the state and they were up for the challenge. They wanted to do it, and did a great job,"  Mr. Santilli said.

"They liked the fact that I followed through with my promise.  And if my pink hair brings awareness toward breast cancer, it was worth it.”

Santilli said his grandmother survived breast cancer twice. “Everyone knows someone who has been affected by it,” he said. “With the money raised for research, breast cancer will be as easy to eliminate as the pink from my hair.”

The pink dye was not permanent - Santilli claims it would eventually wash out with shampoo.

The Breast Cancer Research semi-postal stamps are sold for 55 cents each or $US11 per sheet.  His clerks sold 590 sheets during the month of October, which is Breast Cancer Awareness Month in the USA.

Of the $US6,500, approximately $US1,652 will go to the National Institutes of Health, and to the Department of Defence for research purposes.

Mr. Santilli said that in south-eastern New England alone, more than $US300,000 was raised by selling 27,000 sheets of breast cancer stamps and $US76,300 will go toward research.

"Every time someone puts one of these stamps on their mail, it brings awareness about breast cancer.  The disease is treatable with early detection" he said.

When asked if he plans to repeat the challenge this year, perhaps raising the bar higher than last year's challenge, Mr. Santilli smiled and said: "with this team - anything is possible." 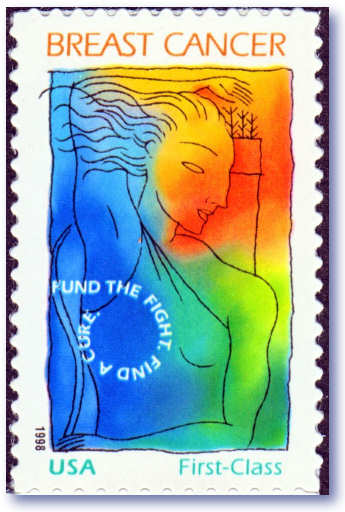 The Breast Cancer Research semi-postal was issued on July 29, 1998, at a first day ceremony held in the White House. It was a very unusual step in US stamp history ..  not known for her charity or semi-postal issues.

To date, the stamp has raised about $US60 million for breast cancer research, and over 800 million stamps have been sold.

Designed by Ethel Kessler of Bethesda, Maryland, the stamp features the phrases, "Fund the Fight" and "Find a Cure" and has an illustration of a mythical "Goddess of the Hunt" by Whitney Sherman of Baltimore.

A four-year extension of this Breast Cancer Research (BCRS) semi-postal stamp program has recently been approved beyond Dec. 31, 2007.

I attended a dealer dinner at Christmas hosted by Mr Noel Leahey, head of Australia Post Philatelic, and his marketing manager.

Whilst there I raised this USA charity stamp program, outlined the enormous sales (and political) success it has enjoyed, and said I really hoped Australia might do something similar.  Time will tell

"The Italy Find"
In a recent column here I outlined the amazing "Italy Find" of 75 kilos of 1d Red KGV heads on piece.  They had not been seen by stamp eyes for 85 years and yielded the most amazing range of material to the lucky Australian finder "Mr. X".
The web-link to his very detailed story on stampboards.com is here -
www.tinyurl.com/2753m2 - a "must read" article for all collectors.
Included in this amazing treasure trove were the amazing used block 4 of the 1d red KGV "Rusted Clichés", a block of 9 of the "Substituted Cliché's", and a superb Die 2 1d Red single line perf!

As well as ½d green single line perfs,  and other major flaws and varieties.  And Salmon Eosin shades of all kinds - many on piece with normals, and Eosins with "OS" and private perfins.

These were all major pieces, many of them in the 4 figure league, and most are illustrated on the stampboards.com link above.

However of course many items are outlined that whilst of not so high a value, are just as fascinating.

One area I was not aware of was the high use of recycled envelopes in government departments and some businesses in this World War 1 paper shortage austerity era.  Carefully study the illustration nearby of KGV 1d reds on piece.

Please look at it carefully and tell me how many stamps do you see. 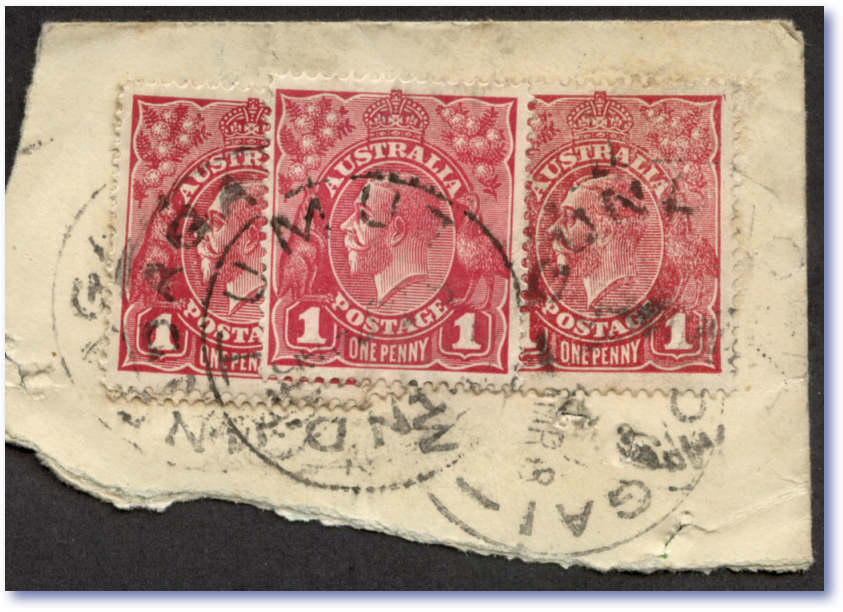 How many 1d red KGV here?

If you look really VERY carefully you can see there are FIVE 1d reds used here on this one letter.  Each cancelled at a different time, and placed on top of a previous copy.  Four have Gundagai NSW cancels, and one has Tumut NSW.

The three we can see readily are all very different, a rough paper at right, and 2 quite different smooth paper shades at left and centre.

This was due to some government departments and businesses re-addressing envelopes and affixing another stamp over the top - to save paper.

The piece shown nearby from the same "Italy Hoard" shows the concept even better. 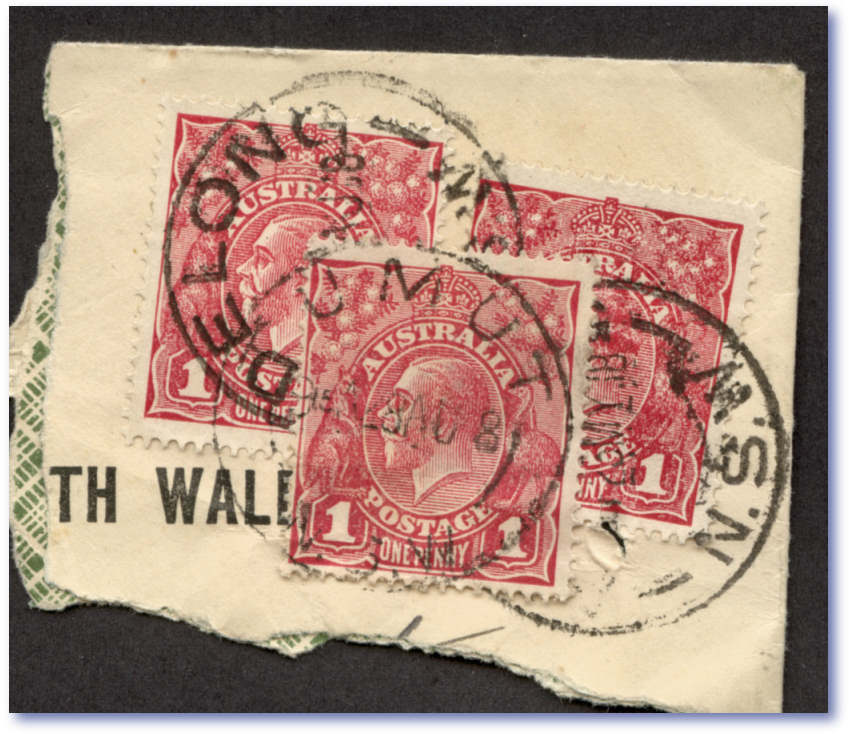 This piece was re-used 3 times (the right hand stamp is on rough paper)
The cancels from left to right are "Adelong NSW" August 1918. "Tumut NSW" August 28, 1918, and a rough paper 1d also cancelled 'Adelong" May 23, 1918.
As can be see this was all originally used on a Bank Of New South Wales letter, showing that business houses as well as Government Departments followed this unusual practice.
We know it was a standard weight letter, as a 1d stamp was used each time.
The ceasefire on the European front was not agreed until November 11, 1918, so in this period of useage, World War 1 was in full flight.
The paper shortage was a great and continuing worry to some in the Post Office - and especially the printer.
Commonwealth Stamp Printer, J.B. Cooke was concerned about a possible paper shortage if the war continued.
I understand there are several letters from Cooke in the PMG Archives on this subject.
One to the Postmaster General concerning lazy counter clerks often using 6 or 12 x 1d stamps on a parcel, instead of a single 6d or 1/- Kangaroo, and asking them to be instructed to cease this "wasteful" practice.
Much printing equipment and ink was (and still is!) sourced from Germany, hence the mass of shades found in the 1d red was directly due to this war-time situation.
The printer literally took delivery of anything that in some way resembled red printing ink, even in small volumes, and hence the nearly weekly changes in shades encountered in the World War 1 era.
The 4d "Orange" KGV group experienced the same WW1 ink problems. They exhibit a riot of shades ranging through the full spectrum from very Deep Orange through to Lemon Yellow and even vibrant pale Lime Yellow.
Indeed the vast array of different papers on this series is due to the same supply uncertainly.  Various types of smooth paper, rough uncoated paper, and the use of unwatermarked and large multiple watermark paper are the result. 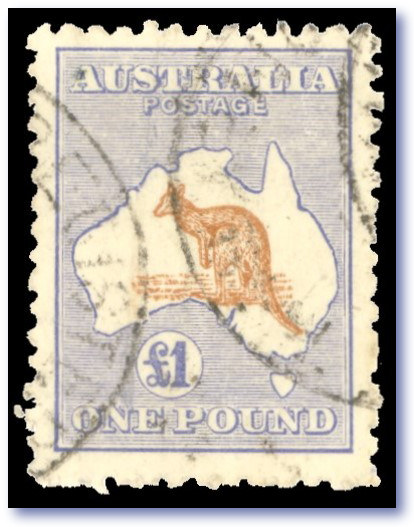 Perforation equipment was also often sourced from Germany - hence perforation heads were often pushed way past their optimum use by date, as replacements were expensive - or more likely, totally impossible to source.
The "raggy" or "fluffy" perfs on many of the Kangaroos (and KGV) printed in this 1914-18 period are due to perforating pins not being replaced as often as was ideal.
Sheets were being perforated with blunt pins, that essentially via brute forced rough holes through the paper, rather than neatly punching it out using sharp new pins.
The nearby illustrated £1 bi-colour Kangaroo is from the June 1917 Cooke printings, showing the "rough perf" appearance of many stamps of this era.

Conditions of Sale, copy upon request BIGGEST STAMP BUYER: Post me ANYTHING via Registered Mail for my same-day cheque. Avoid the  GENERALLY 40%  Auction " Commissions" (15% + 17½ + GST, etc.) AND their five-month delays! Read this for details.