Used BLOCKS of Australia will be listed in the ACSC one day, alongside mint, used and on cover – as they are in European catalogues.

When that occurs, prices will go quite insane, as quite simply - no stock of these things exist. They often have enormous facial eye-appeal.

One of my long term campaigns has been to convince readers – dealers and collectors, to put aside EVERY postally used block of Australia you ever see.

Write down this GUARANTEE! 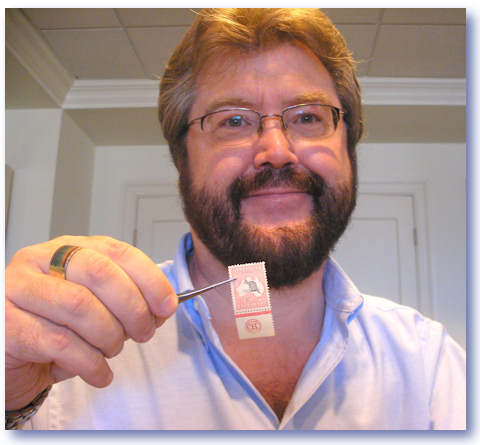 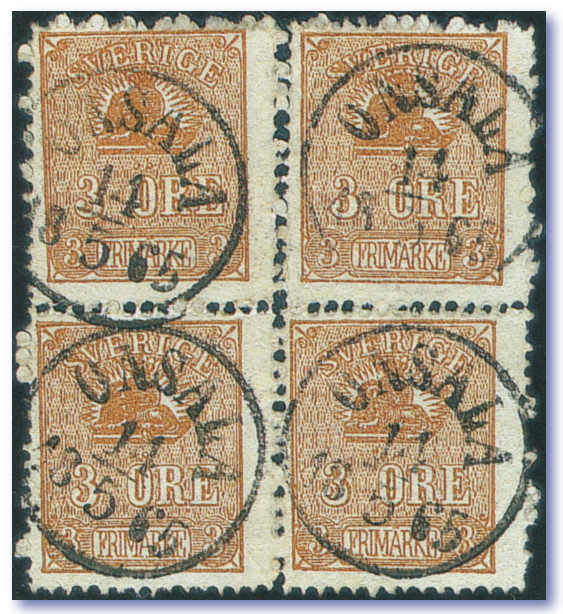 Find one of these USED!

The market leading Facit catalogue does the same for Sweden and Scandinavia.

Australia’s leading collector Arthur Gray and I discussed this subject at length, and he agrees with me there are very few instances where no used blocks are recorded from 1913 to 2010 – and even then, we are only guessing they are not out there.

Until then it had been “assumed” no used blocks of this existed.

For years I have been urging the editor and publisher of the ACSC to list these, and I feel sure one day they will.

It will give added reason for folk to buy each new edition of each catalogue, and will not take any more space or pages than they do now, as they will simply add the universal cross hair “block” symbol to all current listings.

I have discussed this with leading dealers, and all agree the demand for used blocks is increasing all the time.

Richard Juzwin told me he fully agrees the market vastly under-values such material at present, and that he is actively buying it whenever he sees it on offer, and hopes the ACSC lists them in future.

Juzwin told me he was the underbidder on the used block of £1 Bi-Colour Kangaroos shown nearby at Leski’s October 2007 sale in Melbourne.

Those stamps are 3rd watermark, and were invoiced to the buyer at just on $A20,000.  As 4 singles they  would sell for about a QUARTER of that.

Charles Leski told me the vendor bought the block in to show him, housed in a cheap $5 type Chinese stockbook of junk.  They had no idea it was valuable 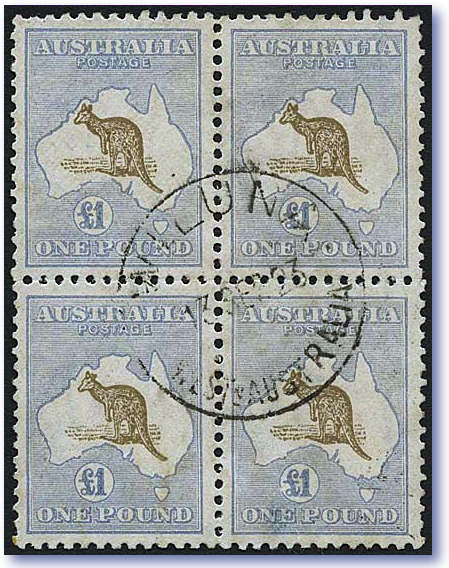 This block had been in the family for decades, and was never sold for 3 generations. It had presumably been soaked off a parcel at the time of receipt in 1923.

An equally nice looking 1913 £1 FIRST Watermark Roo, postally used block 4 came up at a stamp auction in Wales UK a couple of years back.

Myself, Simon Dunkerley and Tony Shields and several others all bid strongly on it, only to see Stanley Gibbons outbid us all.

Most of the Kangaroos are known in used blocks, and the archive sales offered the First Watermark bi-colour high values up to £2 in used blocks with Brisbane cancels, several of which I have sold since – the 10/- is shown nearby

There is also a used imprint block of 8 of the £2 third watermark “OS” in private hands, and other £2 blocks etc.

I recall Martyn Greive from A-One stamps showing me a parcel piece with no less than ELEVEN  x £1 grey 3rd watermark Kangaroos on it,  including a block of 6, and also THREE x £2 Small Multiple Roos.

It was a new discovery he’d found in the past decade, among an estate of a man who threw nothing out – even parcel wrappers. 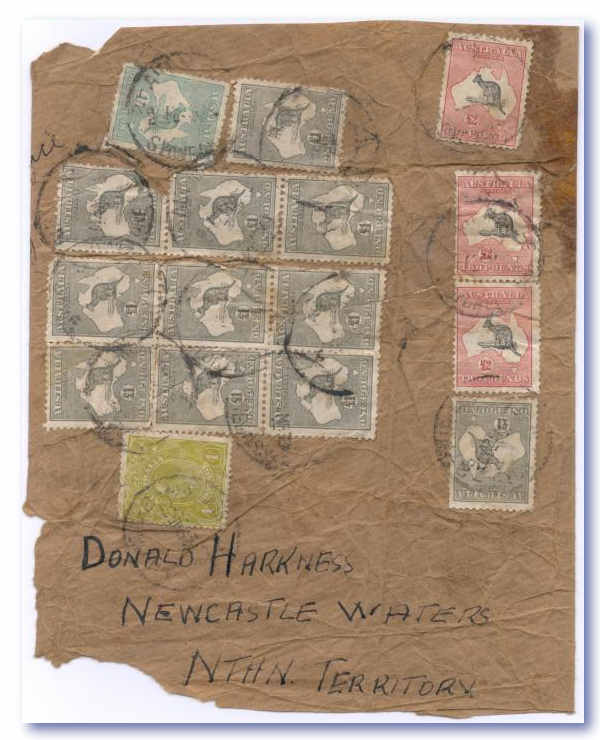 This piece was used in 1933 from Sydney to Newcastle Waters, Northern Territory, on a 32 lbs car parts air shipment.

These tally to over £17 on a domestic parcel, so MUCH higher value used Roo frankings must certainly exist – especially to USA/Europe.

Fellow dealer Rodney Perry told me I needed psychiatric help when I mentioned this parcel piece to him at the Canberra National this March.

Luckily even at 2am I had my laptop with me, and was able to show him the scan nearby - to the vast amusement of the many senior philatelic figures drinking with us at the bar.

I vaguely seem to recall that Rod bet his house, and first born child that I was mistaken, and I need all corroborating witnesses to step forward please.  All your legal fees are covered.  Beston, Beston & Sons are handling the case!

OK, it is tatty and creased, and could well have (and should have) borne a block of 8 x £2 Small Multiple if the clerk had that many in his stamp drawer.  Indeed delightfully, a block of 9 x £2, if it were overpaid just a tad!

The block of 6 of the £1 is undoubtedly unique used. The relative pittance this item sold for will have us ALL wincing in 10 years.

All KGV Heads too.

It is likely all the KGV heads, in all the watermarks and perfs and dies exist in blocks too – but many would be very rare thus.

One the scarcest face different “basic” KGV heads is the 4½d Die 2, and many CTO blocks of that are out there.

I once asked experienced dealer Rod Perry if he had even seen or handled a KGV head 4d Lemon Yellow in a USED block of 4.

Rod thought about it for while, and agreed he could not recall seeing one, but also agreed one or more very likely existed, if a search were made.

Give yourself a challenge!

Someone looking for a rewarding challenge, could do a LOT worse than give themselves a goal to collect all the Australian stamp issues in used blocks of 4.

If you decided Roos above 5/- were removed off your list due to high cost, the remainder of the Commonwealth would be VERY doable over time.

A fun project, that few others (if any) are doing, and when you ever tired of it, the material will be worth ten times what you paid more than likely. 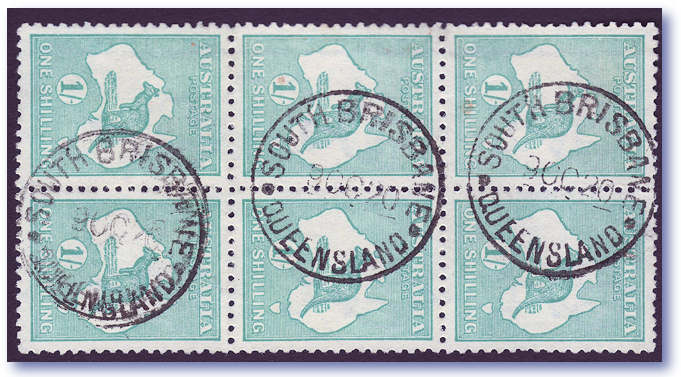 Try finding one of these!

Near all issues in all watermarks are POSSIBLE in used blocks, but locating them will be the challenge.  Most dealers can sell you a MINT block of 1/- Roos, but how many can offer a nice USED block?!

Used blocks of 6d, 9d, and 1/- and 2/- 1930’s roos ARE certainly fairly plentiful, but near all have truly ugly parcel roller cancels, or those massive rubber ‘Parcel Branch’ ones.

Neat circular cancels on Australian pre-war high values are the great exception, not the rule.

As a large dealer I guess I have owned and sold 1,000++  mint copies of this stamp in my time.  Many full sheets of 80 included.

Guess show many USED copies I have handled?

As the August 26, 1964 issued 7/6d was mostly bought up by the trade and speculators, and it had very limited real use by the time of its quick replacement in February 1966.

The WRONG "small number sold" figures quoted by all investors for 40 years are quite incorrect, as the ACSC and Geoff Kellow research now confirms for us.

The number sold was DOUBLE what most think.  Such FACTS do not of course deter those who buy a $6 pocket catalogue, and base $1,000s of purchasing decisions on ancient information!

Try finding postally USED.  The current bizarre present situation where MINT is catalogued higher than used is quite absurd.

The ACSC rates this stamp at $A500 on cover or parcel piece. THAT certainly tells you something, if you are savvy.

I offered this superb block shown nearby for $95 on stampboards, and I have no doubt the buyer in future has a GEM piece.

Blocks are gaining in interest all the time. And as outlined above, USED blocks are my long term hobby horse.  In general they are wildly under-valued.

This stamp is plentiful MINT as speculators bought them heavily, but even a genuine date, single used copy is scarce.

A postal used BLOCK is a minor rarity, and a block such as the one shown nearby with such brilliant crisp small town dated cancels is a lovely piece.

Costs less than an annual album!

I sold it for less than what the current Australia Post Office “annual album” costs!  Absurd. Whomever bought it has a lovely piece for the future. 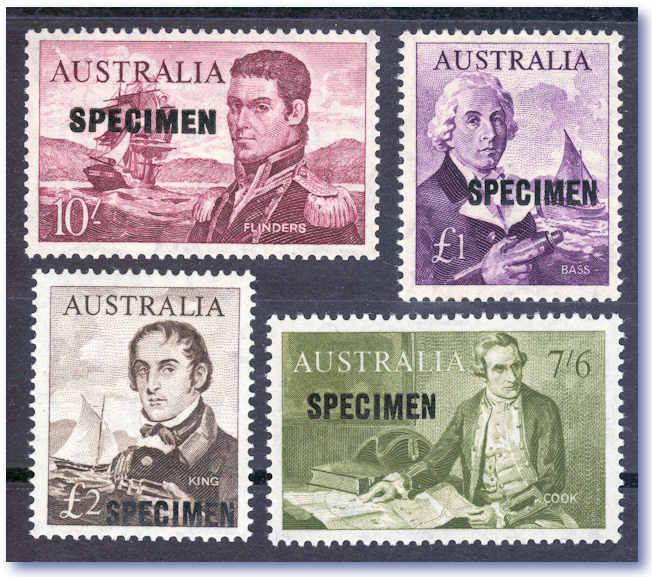 Now THESE are scarce

The savvy way to own this stamp mint is of course overprinted "SPECIMEN".

There were only 3,520 overprinted in September 1964 and September 1965, and it is thought nowhere near all of them were sold by Decimal currency time, soon afterwards in February 1966.

Compare this to the HALF MILLION PLUS normal 7/6d stamps sold .. near all of which are in the hands of dealers and investors.

Of the thousand or two "SPECIMEN" sets sold, near all were given to kids as cheap gifts, as the set was so inexpensive, and were thus hinged or LICKED into kid's album. And often are now lost forever.

I loaded up the set above this week on tinyurl.com/RareStamps -  and THAT is a tough group to find, most especially in well centred condition.

Conditions of Sale, copy upon request BIGGEST STAMP BUYER: Post me ANYTHING via Registered Mail for my same-day cheque. Avoid the  GENERALLY 40%  Auction " Commissions" (15% + 17½ + GST, etc.) AND their five-month delays! Read this for details.
Sign up AUTOMATICALLY to my world renowned bi-weekly stamp gossip mailing list!

All content on every page of this site is International Copyright © 1995 - 2009 Glen Stephens. All rights Reserved.