Sometimes you have to laugh at the things you see in this business.

The photograph nearby shows the facing New Zealand pages of a clearly dilapidated album,  one obviously formed by a youngster.

I see dozens, sometime hundreds of kid's albums a year that look very similar.  In general they are worth from $1 to $10 each.  Probably most of the readers of this magazine started their collecting interest via such an album!

As I reported here last month, THIS particular album has just sold for around $A73,377.  It is dirty, dog-eared, creased and stained, and contains only a few 100 near worthless stamps, untidily arranged in no chronological
order whatever. 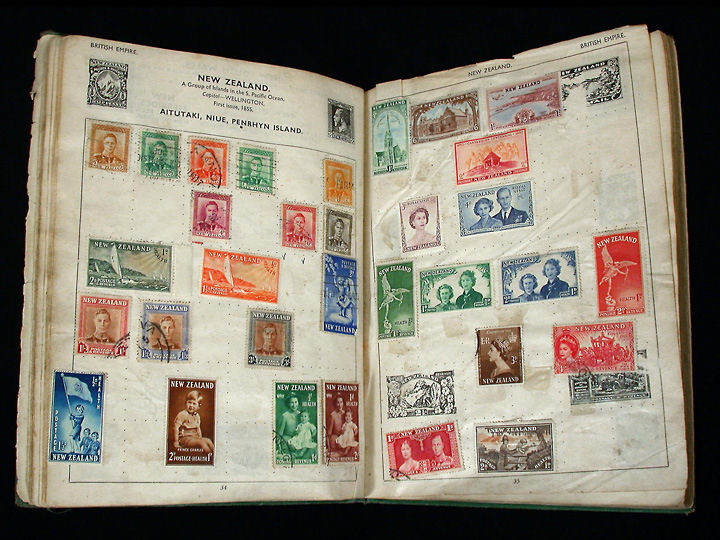 Sold for a fortune.

However it once belonged to ex Beatles songwriter and vocalist, John Lennon.  As I outlined here last month, Stanley Gibbons had the album for sale for £29.950.  They had made a sale at deadline time, but Gibbons director Richard Purkis could not reveal the buyer despite a couple of follow up emails.

Despite the 'State Secret' response from Gibbons to me on July 7,  the Smithsonian National Postal Museum in Washington DC publicly announced June 28 that they were the buyer.

On the album’s title page, beards and moustaches are drawn in blue ink on the likenesses of British monarchs, including Queen Victoria and King George VI - an early sign of the famous Lennon irreverence!

The National Postal Museum in Washington plans to begin displaying the album in October 2005 to coincide with the 65th anniversary of Lennon’s birth, and National Stamp Collecting Month in the USA.

“We’re tremendously excited at the prospect of exhibiting John Lennon’s boyhood stamp album,” curator of philately Wilson Hulme said. “I hope it will inspire new collectors.  There are people who think stamp collecting isn’t cool, and maybe this will cause them to think twice about that. It just doesn’t get cooler than John Lennon.”

I agree 100%.  I suggested to an organiser of the Washington 2006 mega show that they try and have this album loaned to them, which will encourage a lot of non stamps collecting members of general public to attend. This is the kind of thing the organisers of "Titanic Explorer 2005" in Sydney should have done, and failed to do.

The lyric sheet was used by Lennon during the Beatles' last live television performance in 1967.  On the film footage it could be seen dropping from Lennon's music stand to the floor after the song was performed, said a spokesman for London auctioneers Cooper Owen.

A girl working for the BBC at the time retrieved the manuscript from beneath Lennon's music stand.  She provided a letter of authenticity for the sale.

A jacket thrown out by Lennon and wife Yoko Ono when they cleared out their New York apartment in 1977 was given to a Salvation Army charity shop, where it was snapped up by a charity volunteer for £10.  He sold it at auction in
1983 for £100.  It sold at this same sale for £100,000.

A pair of Lennon's trademark round wire spectacles which came in a box addressed to "Mr John Lennon" sold for £55,000.

Even a few juvenile watercolours painted by the musician aged 11 (the same time he filled the stamp collection)  were auctioned for £70,000 (=$A162,400)  - twice their estimated price.  So either Gibbons sold too cheaply or the Smithsonian got a bargain with their tatty stamp album for less than £30,000!

Actually I am sure both parties were well pleased with the transaction.

Quack, Quack!
'Duck' stamps in the USA are big business.  They are revenue stamps, not postage stamps.  Although I have seen a 1934 issue used on a Zeppelin cover to Germany, untaxed and paying the USA postage!  A great item.
The USA has a long history of 'Duck' stamp collecting, and has issued one each year since 1934, and all the recent USA issues from 1991 are of $15 face value.   The USA $15 Duck stamps are typically issued in 'lick and stick' sheets of 20.    Most USA issues sell in the order of  one to two million copies.

Perfectly centred Mint unhinged copies of many the earlier USA issues sell for many $1,000s, and in fact the first 10 years can certainly cost you $US2,000 each, for a really choice unmounted example, and some can sell for over that.
I recall a nice plate block of 6 of the 1934 issue selling for $US27,500 ($A36,185) at Auction a few years back, so these are VERY popular stamps.  And quite a few plate blocks are known of that issue. 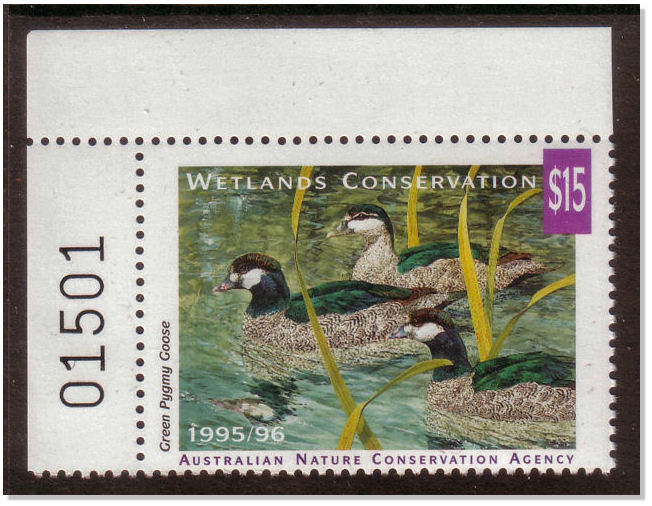 Australia issued a series of 'Duck' stamps starting in 1989.  The stamps were official issues by a Federal Government body.  They were approved and sold at face value by the  Australian National Parks and Wildlife Service, which changed its name in 1993 to the Australian Nature Conservation Agency.
Both agencies were governed by the National Parks and Wildlife Conservation Act of 1975.

These large sized Australian stamps were issued to receipt the entry fees to Wetland Parks, most notably the famous Kakadu Wetlands in the Northern Territory.  Dealer's often have Kakadu entry tickets for sale, franked with the stamps.

The Australian stamps have been popular worldwide with not only collectors of Australian stamps, but worldwide collectors of "Bird" and "Duck" stamp thematics.
I was fortunate to buy a large quantity recently of the 1995 $15 Pygmy Goose Duck issue in sheets, and am offering them on my website at 10-15% of FACE value, to anyone who collects or re-sells these.  www.glenstephens.com/duckstamps.html for anyone interested!
I imagine no-one else on the globe has offered these issues at such a low percentage of face value, and  imagine they will sell pretty quickly.
Australia Post initially insisted these "Duck" stamps be denominated "5" and not "$5" as they were highly likely to be confused with normal postage stamps.  As they were large, superbly printed and perforated, and looked absolutely like 'official' stamps.
For some reason that edict was disregarded later on in the series.  The later ones simply are denominated "$15" and certainly would pass for 'real' stamps at many Post Offices today I feel certain.  (See photo nearby.)
I am selling $7,500 face value parcels for $750, and I can bet some creative minds will be thinking about licking them onto parcels.  I now routinely see Norfolk Island and Nauru (and other similar) stamps used on domestic mail - you really wonder if anyone at mail centres even glances at frankings in many cases?
Surprise Issue
However you will never see the USA issues EVER sold under face value.  In fact one was issued only weeks ago that during July rose rapidly in price from the $US15 face value to $US150 ... and I am certain it will climb much higher once the news spreads.
The $US15 sheetlet illustrated nearby (officially sold for $US20) was a surprise issue.  With very little fanfare of it's existence, they sold out and about 50% (500) of the issue were purchased by Houston Texas dealer Bob Dumaine, owner of the Sam Houston Duck Company.  (He bought 100 for a client who asked him to buy them at face - smart client!)
That company is the clear leader in the field of Duck stamps.  This mini sheet was a "first" - the Federal Duck stamps usually are issued in conventional sheet form and in a self-stick mini sheet.  This one was in the conventional "water activated" gum format.  (You have to love American terminology!)
The perforation and paper and gum are the same on this as the stamps in sheetlets of 20.  Weirdly, Dumaine had ordered this as a "souvenir card with a stamp" when filling out his order in advance.
In early July this year, Dumaine ran a large ad in "Linn's" offering this sheet of the $15 Hooded Mergansers Duck for $US39.  By the August 1 Edition the price had moved to $US49, as it had been confirmed only 1,000 mini sheets were sold. 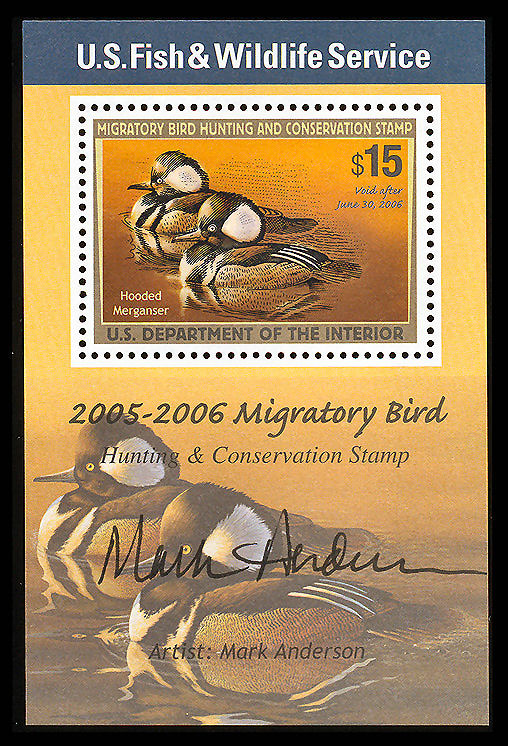 10 times face within a month.

The market then went into melt down mode when that was publicised.  Scott allocated it a catalogue number, and the race to secure copies was then ON!
"Linn's" ran a critical editorial of the Duck stamp office on August 1, saying instead of 1,000 sheets they should have issued 100,000 sheetlets - AND advised collectors and dealers in advance.
Dumaine emailed me August 2nd saying:  'The mini-sheet is unbelievable ... I sold all I had except for those I'd sent in to the PSE for grading,  and now offering to buy them back at $100 each.  As of now, I've only received 12 back and selling those at $150 each.  I'm operating as a stockbroker, selling for more and trying to replace.'
He continued:  "The market is still volatile, we are getting over a hundred calls a day for orders and naturally have absolutely none at the "aged" Linn's price of $49 ..... "
I have no doubt even at $US150 we are just starting to see the beginning of this sheet's price rise.  I told Bob that $US500 would not surprise me at all.  We will see in a year's time if that was an accurate guess.
I called in on Bob and visited him when in Houston once, and he is quite a colourful character.  I ran a snapshot of him here in the magazine - with his 10 gallon hat, huge belt buckle, "loud" braces etc, and chomping on a ceegar as I recall!
Hard to imagine anyone can have a very large company with a good number of staff, and a very large shop, selling primarily DUCK stamps - but that is Texas for you!

Want to see (or print out) this column EXACTLY as it appears in 'Stamp News'?   If so click  snseptember05.pdf   allow 30 sec for downloading the pdf  just "Right mouse click on the link and select SaveAs."
You will need the free Adobe Reader program installed to view it. 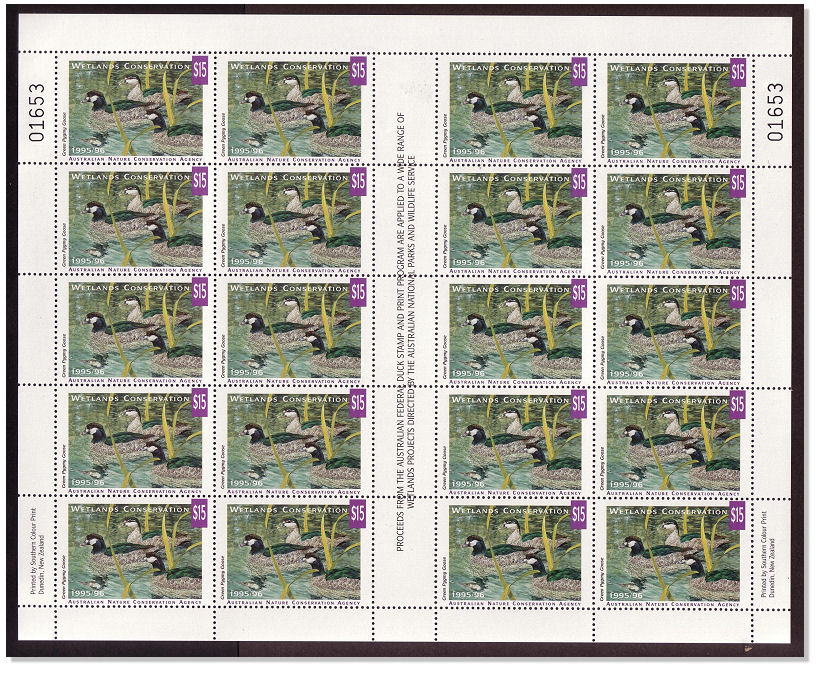 Email me: or click HERE - regular specials+updates then sent to you FREE!